The Importance Of Music In Education 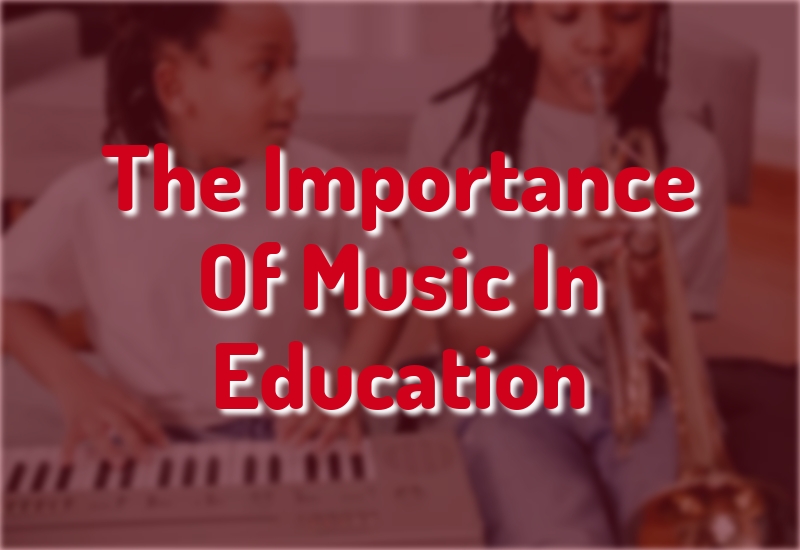 The importance of music in education

In ancient China, Confucius did not conceive of education without music , which he considered the second most important of the six essential arts in which to educate the young, which were: ceremonies, music, archery, chariot driving, etc. writing and math.

Without going so far back in time, in 2011 the Icelandic singer Bjrk released her album Biophilia with the intention of serving as educational material for children aged 10 to 12 and inspiring them to develop their creativity by combining music, nature and technology. Each track on the album described a natural phenomenon such as the cycle of the moon, the reproduction of DNA or the movement of tectonic plates. The project was very successful in Reykjavik schools and is still going on. On the other hand, in Spain it seems that music distracts from other subjects, according to former Minister of Education José Ignacio Wert, and it is no longer compulsory in primary education.

If you want to know the importance and benefits of music in education , keep reading.

The benefits of music in education

Scientific studies indicate that music has positive effects on the cognitive, creative, intellectual and psychological development of children . It has even been shown that music stimulates the left hemisphere of the brain , which is responsible for learning language, numbers and the use of logic. To find out how this is carried out in practice, we have interviewed Anna Dez Bereziartua , who has been teaching music with children, adolescents and adults for more than thirty years.

That music increases the capacity of memory, attention and concentration of children is nothing new. Nor is the relationship between music and mathematics , he tells us. But let’s go by parts. The melodic work favors the memorization of texts and the correct accentuation of words and even improves diction. Auditory work with melody and timbre benefits the ability to concentrate and the learning of other languages. While the rhythmic work helps the understanding of mathematical relationships, says Anna Dez.

In fact, at the beginning of 2019, the Autonomous University of Barcelona welcomed university professors and teacher trainers from different European countries from the European Music Portfolio: Sounding Ways into Mathematics (EMP-P) project, which aims to influence, on the one hand, the joint work of mathematical and musical skills in primary education and, on the other, in promoting the creativity of teachers as a means to favor a more interdisciplinary education. Some pilot schools in the Barcelona metropolitan area are already integrating it and a working group called Musicomatics has been created.

Music and other subjects

Given the supposed interference of music in the learning of other subjects, it seems that it is quite the opposite. Music helps to interrelate knowledge , says Anna Dez, who currently works as a primary and secondary music teacher at Escola L Horitz in Barcelona, a school that bases its project on offering students all the resources within their reach so that they are able to develop his own future. It attaches great importance to one of the resources, music, which accompanies students from the first day of their schooling to the last.

Musical learning helps socialization and fosters collaboration, a critical spirit and respect when carrying out collective activities. In addition, through songs you can learn values, habits, the alphabet, multiplication tables, etc. For example, we can relate the table in number three to the rhythm of the waltz. Moreover, from the study of an instrument many subjects can be studied : geography (where it originates from), history (when did it appear), mathematics (size and proportions), physics (acoustics and sonority), plastic arts (drawing it or creating it with different materials) and whatever the teacher can think of, says Anna Dez.

And why is it so important? Because music accompanies us at all stages of our lives and, fortunately, today the educational community is clear about the key role that music plays in the overall education of students and both parents and society in general understand that artistic subjects are important for the good development of children.

Music and education: the importance of music in teaching

Music has a great impact on children’s learning, it works as a teaching method that generates a better atmosphere in the classroom. Music and education have been linked since ancient times. In this post we address the importance of music in teaching.

There are many scientific studies that show that music has positive effects on the cognitive development of people; that is, knowledge is acquired through learning and experience.

Music is the combination of sounds and silences that follow a series of laws at the time of composing, such as harmony, rhythm and melody. When listening to music (or interpreting) the brain and mind are activated in different areas, awakening emotions, imagination and feelings.

Specifically, music especially affects the stimulation of the left hemisphere of the brain, which is in charge of everything related to logic, communication skills, language and numbers.

On the other hand, this action can also generate certain types of effects, including:

Benefits of music in education

Music has a great impact on the development and learning of children. Among the benefits of incorporating music into education would be:

For these and more reasons, music is no longer considered just a subject. It is also applied as a teaching method that allows generating a different environment for students while they carry out their study activities or when classes are being taught, making the student increase the understanding of information, concentration and memory capacity.

The importance of music in children’s education

Music is a subject taught at school. Generally, in Ecuador, children receive two 45-minute classes per week. At each stage, and depending on their age, they learn different things.

Thus, early stimulation children are taught about onomatopoeic sounds – such as identifying the sounds of animals – then about rhythm and movement, reading musical notes, expressing themselves with music through painting, using and play musical instruments that are usually piano, flute or guitar, sing and sing songs… and, above all, they learn about Ecuadorian music.

At the school stage this subject is considered as an extracurricular activity; The students are the ones who decide if they receive this type of training, which can be through choirs, bands, music clubs, among others.

Undoubtedly, music and education go hand in hand, but the teaching of music requires teachers with adequate training and specialization, such as that provided by the Degree in Music or the Master’s Degree in Musical Pedagogy.

Being a teacher or a musician does not guarantee correct musical pedagogy, so having this type of training helps to improve the way music is imparted to students and thus maximize their learning.

If I offered to provide you hundreds of legit sheet music PDFs for your kids:

...would you take me up on that offer?

I started Music4Kids with a simple goal in mind: To provide valuable information to guiding parents who want to raise musically inclined kids.