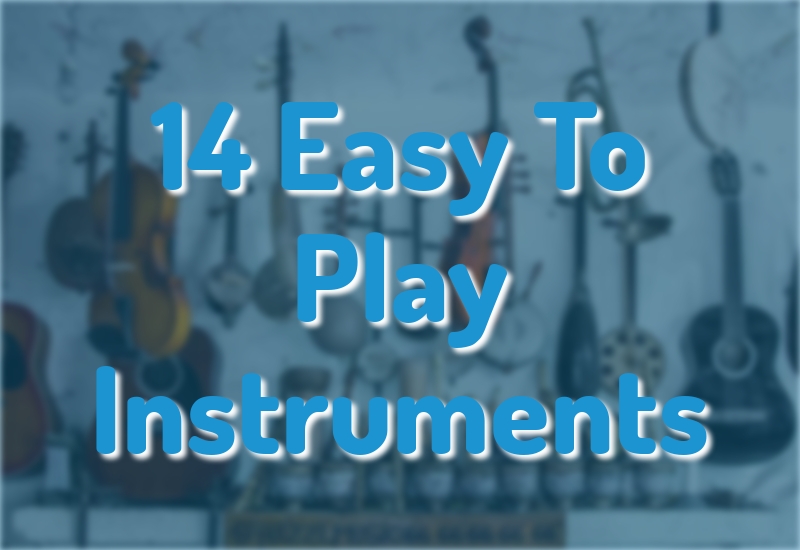 Did you know that there are many easy instruments to play in a short time?

Yes, although mastering them to perfection may take years, the point is that, with these instruments, in a few months you will be able to play melodies, accompany your favorite songs, or sing your own lyrics while playing chords with your instrument.

One of the easiest instruments to learn to play from scratch is the ukulele. The issue is that it is a kind of small guitar, with just four strings and less musical and playing complexity. This translates into a faster learning curve where you’ll be playing your favorite songs in no time. Also, being a smaller version of the guitar, you learn basic things that you can then apply to it. Then you can pick up a guitar and it will be easier than starting from scratch.

Having only four strings, it is one of the easiest instruments to learn and most comfortable for people with small hands or fingers. Therefore, it is also perfect for children!

Do you want more reasons to start with the ukulele? Well, it’s also a pretty cheap instrument, so you won’t have wasted your money if you end up not liking it. It’s also super light and easy to carry and its strings are softer than guitar strings so it doesn’t bother your fingers as much at first.

The harmonica is another of the easiest instruments to learn, especially for beginners and those who have no knowledge of music theory. The point is that it is an instrument where the notes are already pre-established, so to speak. So it is difficult to play a bad note.

That is to say, practically where you blow, a note will sound good. Another advantage of this musical instrument is that, like the ukulele, it is also very light and easy to take with you anywhere.

This not only means that it is easy to transport , but it is also easy to practice. You will not have to pull cables, connect amplifiers, clean or assemble parts, it is to take your harmonica with your hands, bring it to your lips and blow. That easy.

The drawer, originally from Peru and adopted by many other styles, such as flamenco. It is a fairly easy instrument to learn and one that you can begin to master intuitively, as is the case with most percussion instruments.

It is that, although there are many advanced techniques and it can take you years to master it both technically and musically, it is true that it is easy to play at first. You will notice that depending on where you play it and whether you play it with your hands, fingers or even the palm, the sound will be different. Start combining those sounds with the rhythms and you’re good to go.

It is also small and quite light. This will make it quite easy for you to take with you wherever you want.

Although the piano and a keyboard may have a great difference in the number of keys, they are basically the same. At least at the level of disposition of the notes and keys.

The piano usually has about 88 keys, while the keyboard has just over half, 49. So, if you go from one to another, you won’t notice too much difference and you can use the same techniques already learned. Now, playing piano or keyboard is easy at first because the notes are already there, you just have to learn them and play them. In a short time, beginners can already play basic songs.

Learning to play the piano also helps you with music theory, as it is necessary to be able to play it correctly.

Let’s see, the acoustic guitar is a complicated musical instrument to master, since it has a lot of rhythmic and musical complexity. Not to mention the great variety of techniques there are to play it.

Now, for the one who starts from scratch it is not difficult to learn several basic chords and play songs of pop or rock music. By practicing several hours a day, in a few weeks you will be able to play several of your favorite songs. It is also true that it is not as comfortable for children or people with very small hands. But with practice you get used to it and in a short time you will be able to play.

You could even start on your own without the need of a music teacher.

The bass has a great advantage, and it is that it combines the ease of the ukulele, since it has only 4 strings , but it also has another added benefit: All bands need one! That’s right, the bass is one of the most suitable musical instruments if you want to start playing in a band. It is that the majority chooses the guitar or the drums, but few go for the bass.

For this reason, there are usually many guitarists and drummers, but few bassists. Now keep in mind that the neck is thicker and the strings are bigger and harder. But, just like learning to play the guitar , you’ll get used to it.

It also has basic rhythms and progressions that you can learn quickly. In addition, the most basic can be played without having to learn chords, which makes things much easier.

The sax is the easiest instrument to learn if you like jazz. Being a saxophone master is something else, but learning the basics of playing a couple of songs won’t take too long. One advantage of the saxophone is that to play well, you basically have to play the correct key that makes the correct note. Unlike other wind instruments where you have to play a lot by ear.

Now, saxophones are not small instruments like a flute or ukulele, keep that in mind. My advice: When you’re starting out, practice at least an hour every day. You will notice improvements very quickly.

There is something that every drummer knows: the neighbors hate drums! Maybe it’s part of what makes it so much fun to play but more likely the reason why they call the police at 02:00. Oops.

Well, seriously, learning to play the drums is not complicated at first, since it is about coordination, beginning to understand the rhythms and just trying each drum. If you are a person with rhythm skills, chances are that in a short time you will already be accompanying your favorite songs. Of course, remember that the drums requires a lot of practice to master it.

The Irish flute, known also as a tin whistle , may seem like one of those rare musical instruments that few people know about, but it is actually that captivating instrument that you hear in traditional Irish and Celtic music.

It is a long, very thin instrument with 6 holes to play the musical notes. In fact, it closely resembles the recorder. It is easy for beginners to play because the fingerings are quite simple and can be learned in a short time. However, it will take you longer to master the technique of lips, tongue and breath. Although there are tricks that you can learn in a short time to get more out of your Irish flute.

The flute has many similarities to the Irish flute in that you can play the basics quickly as the fingerings are not too complicated. But it takes practice and patience to master. Whoever starts playing a musical instrument for the first time, and has no musical knowledge, can learn basic and children’s songs in a short time.

However, the flute is one of the most difficult instruments to master. Think that just going from beginner to the next level can take you 3 years.

Many people decide to start music with piano and guitar because of its popularity and wide repertoire. However, the electronic battery is great. It’s just as easy to learn as acoustic drums can be, but it eliminates one of its drawbacks: noise.

The electronic drums can be 100% silent. This way, you won’t have annoying neighbors every time you practice. They are also easier to transport than acoustics, are lightweight, and often have sample sounds to help you learn from scratch. Pair of spikes.

The tambourine is one of those instruments that we all know, since it is part of a large number of children’s and popular songs around the world. And not only that. You can also hear it in world famous songs like Hey Jude by The Beatles. It is honestly one of the simplest instruments you could learn.

Just listen carefully to the rhythm of the song you hear and accompany it with your tambourine. Sure, the tambourine also has advanced techniques and theory behind it. You will have to study those rhythms and practice a lot to be a master of this instrument.

Do you like salsa, Cuban son and other Latin rhythms? Then maracas are the perfect instrument for you. You can start with very basic rhythms that will allow you to accompany practically any song as long as you can match the rhythms of these musical styles.

That said, it’s a fairly easy instrument to play at first, so from the start you could grab a couple of maracas and play along with your favorite songs. It is quite intuitive, although it is true that there are very complicated and difficult patterns that take a lot of time and hours of practice to master.

They are played in pairs, placed between the legs or on supports and touched with the hands, fingers, palms or even the wrists. If you like Latin rhythms, do not hesitate to try the bongs.

If I offered to provide you hundreds of legit sheet music PDFs for your kids:

...would you take me up on that offer?

I started Music4Kids with a simple goal in mind: To provide valuable information to guiding parents who want to raise musically inclined kids.